Stacey Aquila has had over eight years of teaching experience. She has 25 years of dance training experience in jazz, tap, ballet, lyrical, modern, hip hop and pointe. Stacey loves teaching dance to children of all ages. Stacey encourages students to work together as a team, and to achieve more than they thought they could as individuals.

Stacey Aquila began dancing at the age of three and has continued training and competing across Canada/USA ever since. She continues her training in Toronto, and is always developing new and exciting dance moves and choreography for her students. 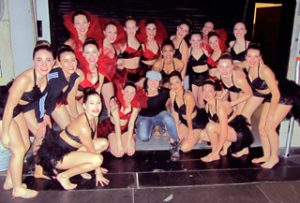 Stacey is a graduate of the Randolph Academy for the Performing Arts. She studied with many dance professionals such as Gregory Hines, George Randolph, Karen Andrew and Siona Jackson. Stacey has also performed professionally on stage, including a role as ‘Cha Cha” in the production of ‘Grease’ at the Atlantis Theatre in Toronto.

Stacey is one of Premiere’s top choreographers for her imaginative and original dances, especially in tap and street style. Stacey has also choreographed for numerous musical performance groups (Backstreet Boys Tribute). Among her stage performances are Walt Disney Press Release, Class Act, Hansel and Gretel, A Midsummer Nights Dream,Vagina Monologues, and many more.

Back to Staff Page